How Donald Trump – and America – Lost the 2020 Election

“We’re all victims…. every one of you,” said Donald Trump at a Georgia rally on December 5, over a month after he lost the 2020 Election. This is the Republican Party of Donald Trump. The party that once laid claim to values like rugged independence, stoicism, morality, and personal responsibility has been led by a lying trust fund baby off the cliff of self-respect to become the party of self-pitying victims.

During his 2020 campaign, Trump announced at many of his rallies that the coming election would be fraudulent. He had said this during his 2016 campaign as well, but after winning that election, the fraud that he was convinced of apparently no longer mattered to him, and the 2016 Election became “the Sacred Election.” In 2020, he had the power of the Presidency as he warned of a “rigged election.” If he honestly knew of some coming election fraud, months in advance, he could have had the Department of Justice take action to stop it. But he did not do so, because in reality, he had no clairvoyant knowledge of widespread election fraud. He was repeatedly declaring impending fraud because he knew that there was a good chance that he would lose. Raging narcissist that he is, that outcome would be intolerable, so he wanted to sow the seeds of doubt to delegitimize the result in advance if it went against him.

Amid a deadly and poorly controlled pandemic, voting by mail – a perfectly legitimate voting method that the President himself often uses – was a far safer option than in-person voting. Rather than encouraging this, however, the President proclaimed that voting by mail was inherently fraudulent, and that that was how the coming fraud would occur (he even knew the method of fraud in advance, yet chose not to stop it). His supporters, hearing this, certainly didn’t want to participate in a fraud that would harm the President, so many Trump voters chose instead to cast their votes in person on Election Day. Democrats, on the other hand, tended to be much more cautious about the virus, and chose to vote early or by mail, rather than risking exposure potentially waiting for hours in long lines. Some other Democrats voted on Election Day as well, ultimately resulting in more votes for Biden.

Some of Trump’s supporters saw the President’s massive campaign rallies packed with thousands of people, and Joe Biden’s socially distanced rallies with a relatively tiny number of people, and equated crowd size with expected number of votes, rather than with judgment about acceptable risk during a pandemic. They were likely unaware that in the 2000 Election, Green Party Presidential candidate Ralph Nader was holding rallies with 10,000-12,000 people (all of whom had to buy tickets) in city after city, while the (free) rallies of Democrat Al Gore and Republican George W. Bush rarely topped 3,000. However, Trump supporters would likely recall that Bush and Gore both got dramatically more votes than Nader. Rally crowd size is absolutely an indication of the enthusiasm of a group of people. It is not an indication of likely vote count, and during a deadly pandemic that one candidate’s supporters take seriously, crowd size is an even weaker predictor of votes. 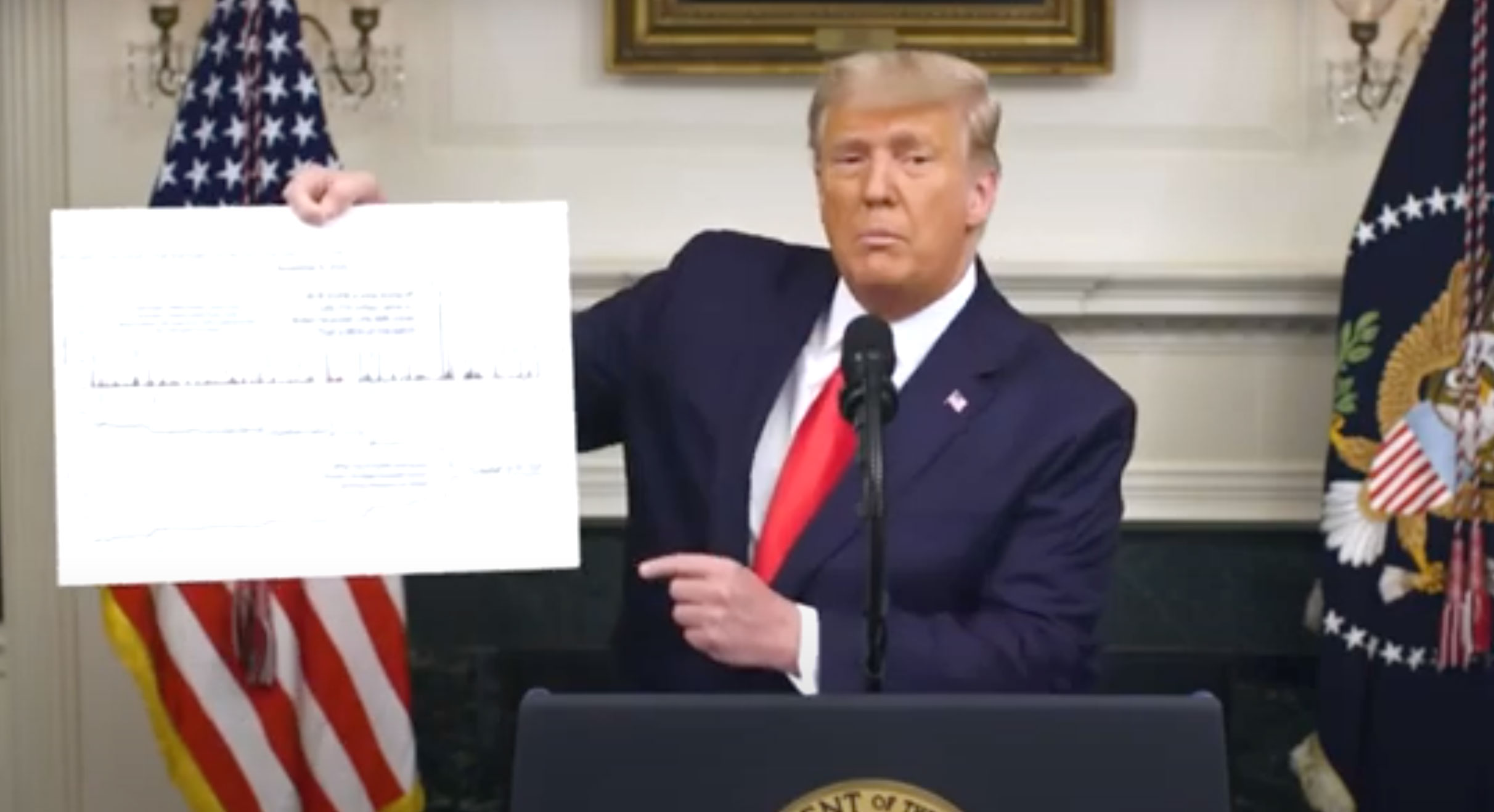 The biggest evidence of electoral fraud that Trump supporters point to came when the election results were counted on Election Night. Early on, the President had a strong lead in the vote count, and Trump supporters went to bed snug in the confidence of four more years of the best President ever. But they woke up to see Biden pulling ahead – significantly, and his lead only increased from then on. How could this have happened unless there was fraud?

Many states count Election Day ballots first, and have laws that don’t allow them to begin counting mail-in ballots until all Election Day votes have been cast. Mail-in ballots take longer to count, because each ballot needs to be removed from two envelopes, and there are numerous verifications that need to be done for each mail-in vote before adding it to the count. That means that the results from mail-in votes tend to come in after most Election Day votes. As mentioned previously, Trump supporters leaned toward voting in person on Election Day, so their votes were counted first. Biden supporters leaned toward voting by mail, so their votes came in later and took longer to count.

Without a doubt, there were voting irregularities and individual instances of voter fraud in the 2020 Election, as there are in every election. However, the best witnesses to a more grand conspiracy, such as Rudy Guiliani’s star witness in Michigan, were deemed not credible by judges and by Republican politicians.

After over a week of Trump denouncing a legitimate American election as fraudulent, America’s head of election cybersecurity, Christopher Krebs (a Trump appointee), stated that “There is no evidence that any voting system deleted or lost votes, changed votes, or was in any way compromised” and that 2020 was the most secure election in American history – a verbal offense for which he was promptly fired.

Republican Governors and Secretaries of State confirmed the legitimacy of the election, and stated that it was dangerous for the President to continue claiming otherwise. States did audits and recounts (sometimes more than one recount), which continued to affirm the election results. Trump’s loyal Attorney General Bill Barr publicly stated that there was no evidence of widespread election fraud that could have impacted the end result. Dozens of lawsuits by the Trump Campaign and its surrogates were dropped or thrown out for lack of evidence – sometimes by Republican judges. Most recently, the big case that Trump had pinned his hopes on, wherein 20 State Attorneys General petitioned the Republican-majority Supreme Court to nullify the votes of Michigan, Wisconsin, Georgia, and Pennsylvania, was rejected by the Supreme Court, including the by three Trump-appointed Justices. On Monday, the electors will cast their official votes, solidifying the fact that Biden won and Trump lost.

One would hope that this would be the end of all this nonsense, but it will not. On Saturday, Trump posted “WE HAVE JUST BEGUN TO FIGHT!!!” Believe him. Anyone waiting for that magical moment when he will begrudgingly concede the election, or at least for the moment when Republican leaders will stop sycophantically going along with the fantasies of this whiny man-baby, will be sorely disappointed. Every lie that Trump tells is a loyalty test, and once a politician goes along with it, they have made a commitment – to the lie and to Trump. Stepping back from the lie is to publicly admit their own weak-kneed, craven dishonesty, to risk fierce condemnation from Trump, and to suffer instant rejection from Trump’s base of voters. Few Republican politicians seem courageous or honest enough to take that chance.

The charade will not stop. America will continue to endure a day’s worth of 9/11s every day from COVID-19 for the rest of Trump’s term, while he pats himself on the back for the fabulous job he’s done on that and every other issue. Trump will leave office still claiming that the election was illegitimate and that he would have won if the Democrats hadn’t cheated, and more Americans’ view of their own democracy will be diminished. Trump will continue to be highly influential in American politics as a sought-after conservative media star, where he will regularly attack those who acknowledge any reality other than his, and who thereby “betray” him (and by extension, betray America). He will hold regular rallies for his 2024 Presidential run, partly because his delicate, insatiable ego can’t handle giving up those cult-like festivals of idolatry, and partly because the rallies will give him another platform to continue claiming that he won the 2020 Election, stoking a false grievance among his supporters. He will use social media daily to undermine every action of Joe Biden – a milk toast, middle-of-the-road Democrat – whose most moderate proposals will be instantly branded as wild-eyed socialism aimed at turning America into the mirror image of communist China. Republican Senators and Representatives, tremblingly fearful of an angry Trump tweet, will all fall in line, denouncing offensive Biden proposals like infrastructure investments, economic stimulus, and efficient vaccine distribution. In short, Trump will continue on as a shadow President, and the only real change from his actual Presidency is that he will no longer be able to activate the nuclear codes or to sign executive orders and legislation. We will count ourselves fortunate if, in the coming years, he doesn’t egg on his most rabid followers from the sidelines into pursuing an all out armed civil war in the United States.

This will be the ongoing legacy of Donald Trump, victim, the “man” who lost the 2020 Election, and who has made America great again.