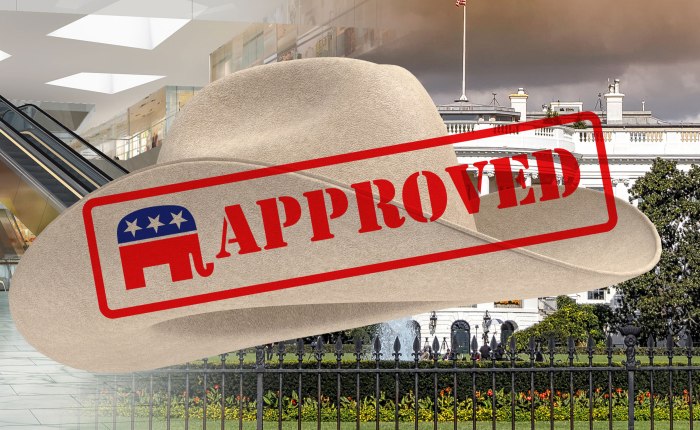 How low can Republicans go, some may ask. After months of looking the other way as Donald Trump toys with nuclear war, alienates our international allies, reaps millions in profits from his Presidency, and tweets falsehoods on a regular basis, many thought that the Republican Party had hit rock bottom. Until they endorsed accused pedophile Roy Moore for the US Senate.

Multiple women have alleged that Roy Moore dated them or engaged in sexual activity with them when they were teens. At the time, Moore was a District Attorney in his 30s in Alabama. In his defense, Moore recently asserted on Fox’s Sean Hannity’s show that he had never dated any girl without first getting “permission of her mother.”

How can the Republican Party, which for years had sanctimoniously proclaimed itself the party of God and morality, throw its endorsement behind someone who appears to have sexually preyed on children? Is keeping one Senate seat really so important to them that they are willing to throw aside all pretense of integrity? Yes and no.

Republicans currently hold a slim majority in the Senate, and they would no doubt like to maintain that majority. But there is an office that is far more important to them to hang onto: the Presidency.

The tie-in here requires a look at the immediate circumstances of the President, the Mueller investigation, and what kind of political process could prematurely end that investigation.

Special Prosecutor Robert Mueller has recently subpoenaed and received Donald Trump’s financial records from Germany’s Deutsche Bank. Aside from being one of the few financial institutions willing to lend money to Mr. Trump after one of his bankruptcies, Deutsche Bank was also fined $630 million by the US government in January of this year for laundering over $10 billion for wealthy Russians in a stock fraud scheme. (Money laundering means running illegally obtained money through some process to make it appear legitimate). My personal suspicion is that, prior to his life as a political figure, Donald Trump engaged in real estate transactions that assisted others, including wealthy Russians like oligarch Dmitry Rybolovlev, to launder or hide their money. Such assertions have been made in the infamous “dossier” compiled by former British intelligence officer Christopher Steele.

Vladimir Putin would no doubt be aware of such illegal activity, and could use that knowledge to blackmail President Trump, which would explain the President’s baffling reluctance to criticize Putin while attacking virtually everyone else, including the US intelligence community.

As Mueller ”follows the money” and gets closer to areas that can bear fruit in his investigation, many Republicans, who initially supported the selection of Robert Mueller (a Republican with an excellent reputation within the legal community for his dogged investigative practices and impeccable integrity) have suddenly begun turning on the Special Prosecutor, now calling him “corrupt” and “the head of the snake.” The President has made no secret of his dislike of the Mueller probe, calling it a “witch hunt.”

Yet if Trump were seen as directly trying to remove Robert Mueller after already having fired FBI Director James Comey, it would be viewed as a blatant obstruction of justice. Republicans have discovered another way to get rid of Mueller, and it requires the election of Roy Moore to the Senate.

The Special Prosecutor would ordinarily be appointed by the US Attorney General. However, in the current situation, US Attorney General Jeff Sessions (former Alabama Senator) had recused himself from the Russia investigation, due to his potentially being considered a witness in that case. So instead, Deputy Attorney General Rod Rosenstein was given the responsibility to appoint a Special Counsel. He chose former FBI Director Robert Mueller. Rosenstein would be the most appropriate person to remove Mueller from the case, but seems unlikely to do so, and Sessions cannot do so, because he has recused himself.

Senate Leader Mitch McConnell has been encouraging Alabamans to write in Jeff Sessions when they vote. He has also said that if Roy Moore is elected, the Senate will immediately begin an ethics investigation into the allegations of the various women against Moore. Such an investigation will likely find that these women are in fact telling the truth about their teenage encounters with Roy Moore, and such findings will likely result in the Senate expelling Moore or demanding his resignation.

When a Senator leaves office prematurely, that state’s Governor is empowered to appoint a replacement. Some Republican political operatives have advocated for Moore to be replaced by Attorney General Jeff Sessions, essentially putting Sessions back in his old job as one of Alabama’s two Senators. It would seem a natural choice. 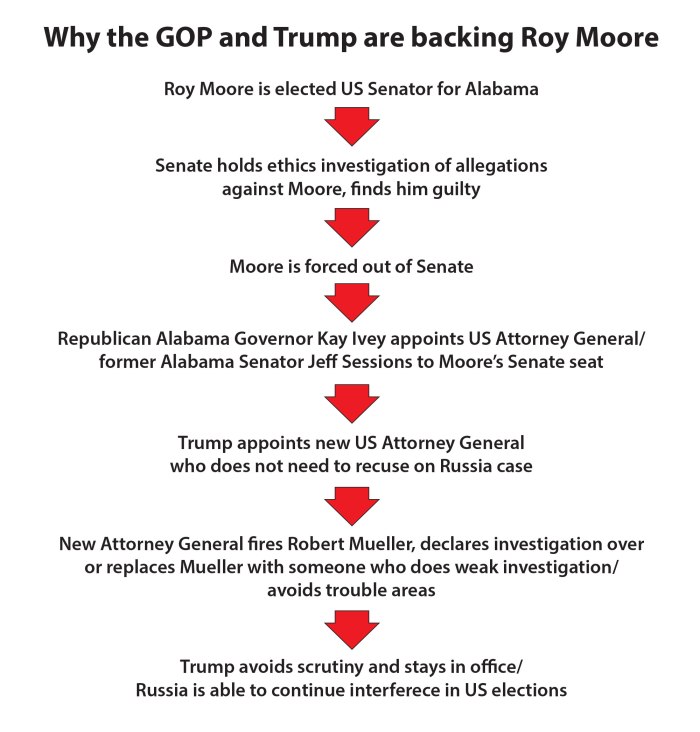 Currently, Roy Moore is ahead of his Democratic opponent Doug Jones in the Alabama polls. If Moore wins, the wheels can easily be put in motion for a premature end to the Russia probe, or for an investigation that avoids looking in the most meaningful and damning areas.

On January 10, 2017, US Senator Jeff Sessions (R-AL) answered questions from Congress to determine whether he should be confirmed as US Attorney General. During that confirmation hearing, US Senator Al Franken (D-MN) asked Sessions the following question:

“CNN just published a story alleging that the intelligence community provided documents to the President-Elect last week that included information that quote ‘Russian operatives claimed to have compromising personal and financial information about Mr. Trump.’ These documents also allegedly say quote ‘there was a continuing exchange of information during the campaign between Trump surrogates and intermediaries for the Russian government’ – again, I’m telling you this as it’s coming out so – you know, but if it’s true, it’s obviously extremely serious, and if there is any evidence that anyone affiliated with the Trump Campaign communicated with the Russian government in the course of this campaign, what will you do?”

Sessions’ response was given under oath:

“Senator Franken, I’m not aware of any of those activities. I have been called a surrogate at a time or two in that campaign, and I did not have communications with the Russians, and I’m unable to comment on it.”

As a result of that confirmation hearing, Jeff Sessions became the United States Attorney General. It was later determined that, while serving as the Trump Campaign’s top national security adviser, Sessions had actually met twice with Russian ambassador Sergey Kislyak, considered by the US intelligence community to be a Russian spy and recruiter of spies, according to CNN. One of these meetings between Sessions and Kislyak was at the Republican National Convention where Trump was nominated as the Republican Party’s candidate for President.

The most benign, charitable interpretation of Sessions’ response to Franken was that he did not fully understand the question. A less kind interpretation is that he was intentionally lying, and there are multiple possibilities in between.

Sessions is scheduled to return to the Senate to testify further on Monday 3/6 in order to clarify his earlier answers. Hopefully questions similar to those above will be asked to shed more light on the situation.

Russia and Wilbur Ross, US Secretary of Commerce

New Commerce Secretary at Nexus of Lucrative Trump Russia Deal (21:44)
This is a must-watch. If you check out nothing else on this site this week, this story is huge.
(MSNBC – 2/27/17)

Russia and the Trump Campaign

“Sergey Kislyak, the Russian ambassador, is considered by US intelligence to be one of Russia’s top spies and spy-recruiters in Washington, according to current and former senior US government officials.”

Why Would Jeff Sessions Hide His Talks With Sergey Kislyak?
(New Yorker – 3/3/17)

Trump: “Nobody Knew Healthcare Could Be So Complicated”
(The Guardian – 2/27/17)

Freedom of the Press

“I consider the media to be indispensable to democracy. We need an independent media to hold people like me to account. Power can be very addictive. And it can be corrosive. And it’s important for the media to call to account people who abuse their power, whether it be here or elsewhere.”

He Yelled ‘Get Out of My Country,’ Witnesses Say, and Then Shot Two Men from India, Killing One
(Washington Post – 2/24/17)

A Sikh Man Was Shot On His Driveway And Allegedly Told, “Go Back To Your Own Country”
(Buzzfeed – 3/4/17)

In Day of Pro-Trump Rallies, California March Turns Violent
(Reuters – 3/4/17)
Editor’s Note: Much of the violence in the rally was committed and/or incited by people who came to protest Trump. When the anti-Trump people behave like this, it serves to discredit the anti-Trump movement, and increases the likelihood that future Trump protests may experience retaliatory violence from Trump supporters.

Trump’s Emotional Moment With a Navy SEAL’s Wife Could Define Him – For Good But Also For Bad
(Aaron Blake, Washington Post – 3/1//17)

I’m a Silicon Valley Liberal, and I Traveled Across the Country to interview 100 Trump Supporters – Here’s What I Learned
(Sam Altman, Business Insider, 2/23/17)